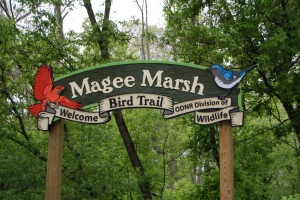 Entrance to the Bird Trail – Photo by Grace Grogan

This little bird spent a lot of time hopping from tree to tree, keeping all entertained with his antics. Photo by Grace Grogan

This past weekend my husband and I decided to drive to Magee Marsh in Ohio to take photographs of birds.   Located on the southern side of Lake Erie, this is where North American Warblers gather during their spring migration, making it a prime spot for both bird enthusiasts and photographers.  People travel from all over the United States and other parts of the world to visit during the prime migration time, which is the last weekend of April thru Mid May.  A birding festival is held during the highest point of migration.   We visited after the festival had ended, but there were still a large number of bird watchers and photographers visiting and we were able to enjoy both the sound of the birds “singing” and the ability to capture them on camera from various points along the boardwalk.

Sitting on a limb enjoying the sunshine and showing off his plumage. It was almost as if he knew I was taking many photographs of him. Photo by Grace Grogan

Although the boardwalk is only about a mile long, Ron and I spent approximately six hours making the walk.  In addition to the birds there are also other items of photographic interest, as this is a nature preserve and nature holds its own beauty.  There are two distinct differences between the photographers and the bird watchers.  Photographers are obviously carrying cameras, often with huge lenses and on tripods.  Their primary focus is to capture hundreds of shots of the birds which they will later sort through, choosing the best and identifying them as they do their photo processing.  The bird enthusiast are usually carrying binoculars, bird books and note pads in which they meticulously record the birds as they see them.   While you will see some bird watchers with cameras, I don’t recall seeing any photographers with binoculars, as your camera and lens serve the same purpose.   Because bird enthusiasts are used to spotting these small creatures they were a handy resource, a groups of bird watchers with their binoculars all pointed in the same direction 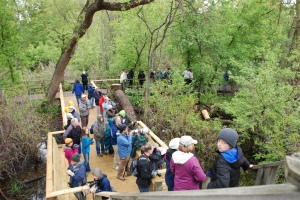 Taken from the top of the viewing platform. Photo by Grace Grogan

generally meant a good place to direct your camera lens as well.

The Magee Marsh boardwalk is well maintained, with periodic benches where you can rest if needed.  There is also a raised viewing platform and other side trails you can take for additional viewing.  The birds are frequently quite close to the boardwalk, so even with a small camera lens or point-and-shoot camera you have a good chance of capturing a nice photograph.  Camera’s click in rapid succession, people scribble notes on their pads of paper, and everyone enjoys the view.  Photographers and Birders are friendly, enthusiastic groups of people.

If you haven’t been to Magee Marsh and love nature, birds, or photography, this should definitely be on your list of places to visit. 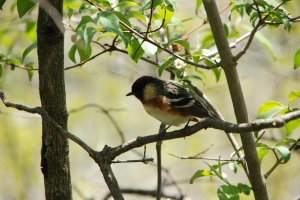 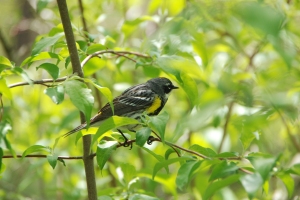 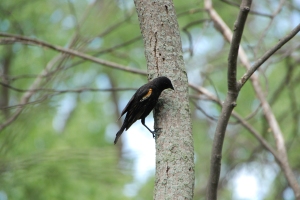 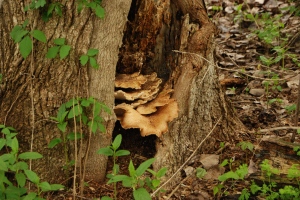 Scared the heck out of me as I was zoomed in to take a photograph when he started straight at me. Photograph by Grace Grogan