WHEN DID STOVE TOP STUFFING OFFER A FREE MICROWAVE DISH?

Why do they have four complete sets of frying pans?  Look at all this new bake wear.  Why in the world would people who rarely ate tacos have six jars of taco sauce?

These are questions that went through the minds of my sister and I as we were cleaning out the kitchen of our parents a couple weeks ago.  The first of many trips I will be making since our father passed away in December and our mother about 19 months ago.  Obviously this is a task that is a lot of work but also good for laughs and memories.  They moved into the house in 1966 when my sister and I were young children, so we will be at this task for quite a while.

We have decided to do the distribution of property in an amicable arrangement.  If only one of us wants something it is theirs.  If both of us want the same item it goes into a group of items we will resolve later, probably by taking turns selecting from the group.  If neither of us wants something but one of our children (who are all adults) do, they get it.  We decided the kitchen and pantry would be our starting point.

Linda wanted a set of Corelle Casserole dishes.  Done.  Caroline needed a spaghetti cooker.  Done.  Carol got a complete set of cookware, looks brand new.  I took some new baking pans and a large Pyrex mix and pour.    What no one wanted we condensed into a couple cupboards for a garage sale later.  Now to tackle the food.

Stove Top Stuffing Mix with Microwave Dish. How old could this be?

What in the world were they thinking?  Did they do any clean outs of expired items?  Did they forget what they had purchased and buy more?  Questions we can only speculate on the answer of.    One unique find was a box of Microwave Stove-Top Stuffing Mix that included its own microwave pan.  No expiration date on the box.  Good Grief — how long ago was that purchased?

People that rarely made tacos had six jars of taco sauce.  Dad used BBQ sauce a log in his cooking, but approximately 16 bottles of the stuff seems excessive, and the list goes on.  Sadly, most of the items are expired and when the weather warms up will be hauled out and trashed

We did end up with a small collection of canned food that is still good.  My sister referred to this as my “If you get snowed in” collection because I travel from 2-1/2 hours away and stay at the house; she lives in the same town.  Nice to know that in a moment of need I have three cans of soup, some canned peaches and pears, and a few cans of wax beans.  I can only hope if it happens it is a small storm.  I may have to sustain myself on coffee and tea, of which we found an ample supply. 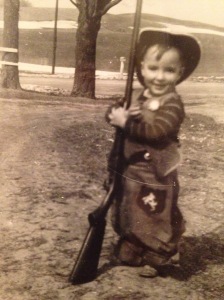 My Dad and a gun. he was about 3 years old at the time.

My parents with my sister and I. I’m the older daughter in the back.

We did take a break by going through some old photos, both from our childhood and antique family pictures.  We both started snapping pictures of the pictures with our cell phones and sharing them on our individual Facebook pages.  Fun memories and a great way to end what was the first of many trips to come.

2 responses to “WHEN DID STOVE TOP STUFFING OFFER A FREE MICROWAVE DISH?”