Why do we have to play fair?

In my local newspaper this week there was a comic posted that said “and for those who did not graduate today…Please step to the stage to receive your Certificate of Participation.”

Sadly, that is what this country is coming to.  Those who achieve are not given proper recognition because it might hurt the feelings of those who did not achieve.

Earlier this month I learned about a Texas high school that would not allow students to wear their National Honor Society stoles during graduation. This is an honor, those students worked hard to achieve those honors and deserve the recognition.  What was the schools reason for banning the stole?  Administration was fearful that other students might feel excluded.

Hello world!  If you do not do the work to achieve then you should be excluded.  That is life!  That is reality!  How can we expect people to lead balanced, productive lives if they never learn that life isn’t fair.  Sometimes you win, sometimes you loose.  Regardless of what happens you continue to move forward and improve yourself.  You struggle, you push forward, you cope.

This is not a new thought process.  It began years ago.  When I was in school not everyone made the sports teams, not everyone won the spelling bee, not everyone was in the speedy readers group.  Some people just weren’t good enough.  If you participated in an activity some people got ribbons for winning, some people got nothing.  That was the way it was and we all knew it.  Whatever you were doing some received recognition for being the best, some people sat on the sidelines with a dream of someday achieving great things as well.  Dreams.  Goals.  Striving for a better future. 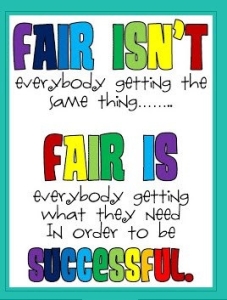 Have we really done those children a favor?  I don’t believe so.  If a child never learns that sometimes life isn’t fair, that sometimes you win and sometimes you loose and that is okay, how can they learn to cope with the realities of life when they become an adult.  They don’t.  I think that is why we have so much violence, so many underachievers.  They never learned to push for the top.  It has been handed to them every step of the way.

I realize that there are some people who simply do not have the ability to achieve greatness.  They may have developmental disabilities, they may be physically impaired, That is okay.  People are different.  Don’t hand them a sympathy ribbon.  Let them compete at their own level with others on the same plateau they are and let them achieve greatness within a group of their own peers.  This will help them learn to work toward a goal and obtain recognition for hard work.

If we go back to letting children experience wins and losses they will learn to cope with life.  They will learn to set goals and improve themselves.  They will have more self-worth than they have by constantly receiving a token certificate of recognition.   Don’t they deserve that?  I think they do.