Dirt on My Shirt

Anyone who has raised a boy can relate to the Dirt on My Shirt poem that I stumbled across recently.  When I saw it memories of my son and my grandsons came to mind.  It is like they are immune to the idea of cleanliness.  If it looks like fun, dig right in.

I have very rarely seen my grandson, Corbin, with a clean face.  I think it is magnetic and attracts dirt, all he has to do is walk across a room and it zeros in on him.  Thinking back to when my son was growing up, there were all kinds of messes and things going on that bring to life the saying “boys will be boys.”

Here are some of my “boys will be boys” memories….

The list could go on forever, and thinking back on those memories makes me smile.   After all, I can still look at Patrick, now 30 years old, and he will have dirt on his shirt, dirt on his hands, and dirt on his face due to something he has been working on.  Oh, and he still leaves dirt on the refrigerator handle when grabbing something to drink.

Share with me your
“Boys Will Be Boys” memories

The other day I had an encounter with a squirrel, well not actually an encounter, more somewhat of an invasion.  I happened to look out the window onto my front porch and spotted a squirrel up on the porch with a huge nut in its mouth.  It seemed to be confused on where it wanted to go.  It came across the porch, then walked toward the steps leading off the porch, then turned around so it was facing the door into the house, then sideways again and disappeared off the side of the porch.

What was the squirrel thinking as he ran back and forth?  Why did he choose to get up onto my porch?  Was he trying to escape the rain?  Where did the nut come from?  This last question is relevant because I don’t have any nut trees on or by my house that I am aware of.  How far did he carry that nut? 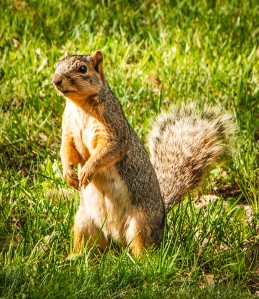 One question was answered by this, as I assume that this could be the same squirrel who left the shell from a nut on my sidewalk about a week ago.  I saw the pieces and wondered where they had come from.   Still I wonder where the squirrel was coming from, how far he is traveling to accumulate his nuts, and why he chose to walk up and across my porch rather than through the front lawn.

This is not the first animal encounter I have had.  Past encounters include bunny rabbits, deer on the front lawn, skunks strolling on my driveway and sidewalk, a rooster walking across the front lawn, birds on my porch eating insects out of spider webs, and a woodpecker pecking at my house.

Whatever possesses these animals to pass my way I will never know.  What is going through their minds as they travel across my yard I sometimes wonder.  Why that woodpecker feels the need to peck away at my house rather than one of the trees I cannot explain.  Wildlife in action.  I’m still pondering over the thought process of that squirrel on my front porch.

Backyard Exploration by a 3-Year Old

Who’s out there? Photo by Grace Grogan

Our 3-year old grandson, Corbin, was recently at our house and I decided to go out and take some photos while he was playing in the backyard. It is easy to forget how active and intrigued with the little things a 3-year old can be. Warning — don’t watch them play if you aren’t feeling energized, because just watching that continuous movement can wear you out.

Up the slide, down the slide, over to the next slide, up and down. Jump in the Little Tikes car, park and get out, go in the Little Tikes house, out of the house, open the windows, shut the windows. Look outside to see who is there. Get back in the car and move it a bit, on the other hand why drive, easier to get out and push. Oops! I haven’t gone down the slide in a few minutes, better take another run at that before walking the ledge around the flower garden. 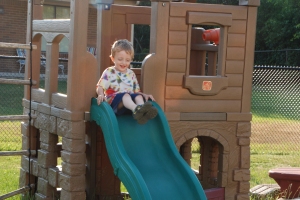 Down the Slide. Photo by Grace Grogan

Hey, there is a hill over there to can roll down, and some exposed dirt to pick up chunks of and throw. What can I see down the water drain? I know you’re supposed to sit at the picnic table, but much easier to play King of the Mountain if standing on it. Wow, Grandma and Grandpa’s big table has a hole in it, wonder what is down there? 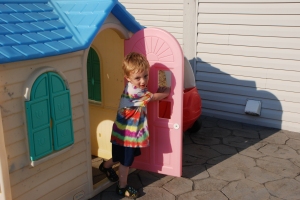 Coming Out. Photo by Grace Grogan

Back and forth, over and over, the activities continued, rotating from one end of the yard to the other over and over again. It never even occurred to me that he was paying any attention to the small windmill we have out there, which was turning at a good clip due to a nice breeze, until the wind stopped. Never underestimate the ability of a child to know what is going on around them. 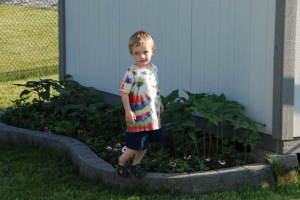 Corbin stopped, pointed to the windmill and said “uh oh, what happened? Turn it back on”

What is in there? Photo by Grace Grogan

Ron blew on it a bit to show Corbin that wind makes it go, not an on/off switch. Of course Corbin didn’t worry for long. After all he had to re-park the car, see what was going on inside his house, and take a few more runs down the slide. Life is a whirlwind of activity when you are three years old.