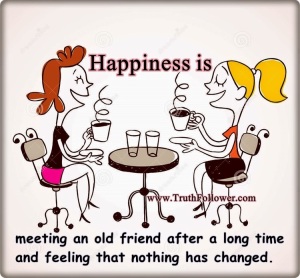 When I saw this image I instantly made a connection with it.  This has happened to me twice.  Once several years ago and again within the past couple months.

While it is always fun to have a wide assortment of friends and to make new friends wherever you go, there is something of value that cannot be replaced with a long-standing friendship.  A friendship that regardless of how long you have not spoken or how long you have been apart maintains an unexplainable level of comfort.  Those are the friendships to be treasured.

I have a friend I met when we were both attending business college back in 1978.  We quickly became friends and although I was only at the school a few months we remained friends.  All of our lives we have lived about four hours apart and contact was limited.

There was no internet, so communication was either phone or snail mail.  With us snail mail was all we did, long distance calls were expensive.  Eventually computers and internet became a way of life and we connected via email, sending each other lengthy emails on an almost daily basis. We were email friends, but still had not seen each other in about 20 years.

When my youngest child was going to be attending a camp in Indiana I realized I would be traveling through Vicki’s area to drop him off.  I inquired about hotels in the area where I might be able to stay on the return trip and then visit her.  Vicki’s immediate response was that I could come stay with her.  I accepted.

Neither of us were concerned about re-connecting in person after so many years.  The man she was dating at the time was, and asked if she wasn’t concerned that we would run out of things to talk about and get bored.  She wasn’t.  We didn’t.   We had a great time, I taught Vicki about scrapbooking, a hobby of mine, and got her hooked  After that we spent years meeting halfway between our homes several times a year to do scrapbooking crops at a large store, then later at her mother’s house.  Recently she came and stayed at my home a couple times to scrap.

We have once again reached a point where we are not getting together as often due to certain commitments in our respective lives.  Sometime in the near future Vicki will be moving out of state to live near her daughter and grandchildren.  However we have a fast and firm friendship.  We have to stay friends, we know too much about each other to ever become enemies!

My more recent connection was on a much different level.  It was someone who I met when I was in 7th grade, 11 years old and he was in 8th grade, 12 years old.  Brad followed me home from school to get my phone number and from that point on until I was 19 and he 20 we were boyfriend/girlfriend off and on, but more on than off.  Everyone assumed we would eventually marry, but we didn’t.  I was the one that made the final break when I met the person that is now and has been my husband for the past 33 years.

I only saw Brad twice after that, once at a mutual friend’s home, and once when he came over to exchange belongings.  When I married I moved two hours away.  I would get updates, or mutual friends would make comments about him on occasion, but we had no contact.

About two years ago we connected on Facebook.  I don’t remember who made the friend request.  However I am more of a Facebook fanatic than Brad is, so most of our communication has been through IM messages.  We have extensive periods of time when there is no contact.  Although I occasionally traveled to  my old hometown, that was for the purpose of visiting family and we never saw each other.

Two years ago my mother passed away, and then my father six months ago.  That left an entire house for my sister and I to empty out, and it is the house they moved into in 1966, the one I grew up in.  A lot of things to go through, so I began making trips home on alternating weekends to do clean-out.  Brad was aware and suggested on one of those trips we get together for dinner or coffee.

About a month ago we did just that.  Brad came to my parents home to pick me up, which was a bit of deja vu.  We had a nice time at dinner reconnecting, and I invited him into the house to continue the conversation after dinner.  It was an enjoyable evening talking about our parents, siblings, spouses, children and grandchildren.   We ended the evening agreeing we would have to do it again sometime.

Brad and I had not seen each other since 1980, but it was a comfortable interaction..  I am glad we reconnected and value the friendship, which I anticipate will grow stronger as time passes.  A friendship developed from old memories of times gone by, but continuing to build through the sharing our current life accomplishments and challenges.

True Friendship is something to cherish, hold dear, and enjoy.  Strong, long-time friendships are the best. 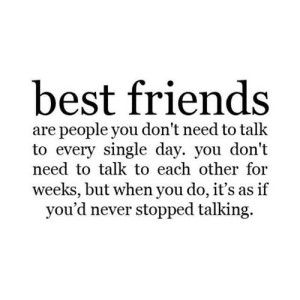 Filed under communication, Life is a Melting Pot