My husband and I flew to Albuquerque, New Mexico October 2, 2015 to attend the first three days of the International Hot Air Balloon Fiesta.  If you have never attended, it is a must see.  It is hard to explain the feeling of standing amongst hundreds of hot air balloons as they inflate for lift-off, and then turning in a circle and everywhere around you and above you are over 500 hot air balloons in a mass ascension.   They have a “main street” area with food vendors, craft vendors, stores, buttons, and various types of merchandise to shop and enjoy. 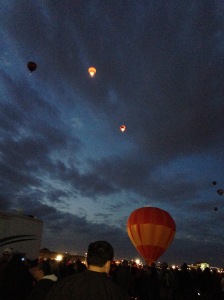 We spent the first day there from beginning to end, arriving at the park around 4:30 am and leaving as the fireworks were being shot off that night.  A long day, but we experienced it all.  The second day of the show we left after the morning lift-off and spent the afternoon driving up to Sante Fe to visit a botanical garden.  We found we enjoyed the morning glow and dawn patrol lift-off more than the evening glow.  It could have been the so-so weather on the night we stayed that left us with that feeling, because the night glows are one of their most popular events. 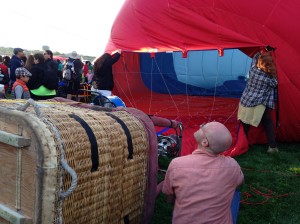 If you have been following my posts for a while you know that my husband visited Sante Fe and Albuquerque during his trip west a few weeks ago, which I talked about in When Your Husband Returns..
This was my first trip to New Mexico, and here are some quick thoughts about the trip:

Read for Take Off. Copyright 2015; Photo by Grace Grogan

Filed under events, Life is a Melting Pot, travel

Prepping for Vacation is Work

My husband and I are taking a long weekend to attend the Hot Air Balloon Festival in Albuquerque, New Mexico. I’ve come to the conclusion that preparing to take a trip is exhausting.  I want to get my desk caught up at work because I will be off Friday and Monday, so I’ve been getting up and going into work an hour earlier than normal each day this week, and then staying 30-45 minutes longer than normal.

Then once I get home I have other prep to do.  We are doing strictly carry-on luggage, so had to pare down our camera gear considerably to make sure we could get that in.  Of course packing for 3-4 days in an airline regulation size bag is tricky, but I think I’ve got it workable.  Then of course the bag to go under my seat with a book, travel vouchers, camera, camera gear, etc.  Could it get any more complicated?

Yes it can, our flight time is so early in the morning that I realized we are going to have to get up and on the road around the time I normally go to bed.  I’m excited, but I have a feeling it is going to be an exhausting trip.  Being photographers we don’t want to miss any photo ops so will be up and on the field bright and early when it opens, and then be shooting all the way through the event.  I’ve discovered I can’t fit my tripod into my carry on luggage, so I’m bummed about that as there will be fireworks each night, but I’ll manage somehow.

So, is travel worth it if you have to wear yourself out in the preparation?  Yes, It always is, and it will be this time as well,  However as I sit here typing this post and realizing how tired I am from this screwed up week I truly do believe that Prepping for Vacation is Work!

Filed under Festivals, Life is a Melting Pot, travel, vacation

When Your Husband Returns

A sketch done of Ron, the artist was Europeon and didn’t want his glasses on because she wanted to see his eyes. Not my favorite, but he likes it.

My husband, Ron Grogan, is battling his third round of cancer and decided that he wanted to take a trip west to Sante Fe, New Mexico, because he read that it is a photographer’s paradise.  He is retired (I work a full-time job), so he packed up his car and left on the 7th of August, delaying his next chemo round until August 26th.

Ron had a great time, I believe he said he took something like 11,000 pictures.  He visited Sante Fe, Albuquerque, Oklahoma City, Carthage, Missouri (home of the Precious Moments Chapel, I’m a collector), and Hocking Hills, Ohio.  He took a jeep photo tour, train ride, hot air balloon ride, and a glider ride.    Ron attended events, estate sales, auctions, and anything else that captured his eye.

When Ron pulled in on Monday at approximately 11:00 pm his car was loaded…trunk, back seat, and passenger seat and had newly tinted windows, another thing he had done while gone.  He didn’t even start to unload until the next morning as I was leaving for work. 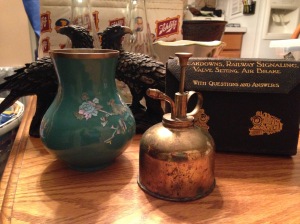 Some of the items Ron acquired at estate sales and/or auctions.

So, now my house is overrun with items we have to figure out where to put.  A huge box of vinyl records…why?  I don’t know.  About 8-10 books he purchased for me, plus 3-4 for himself.  Neat paintings of male and female Indians, plus an Indian blanket we are going to use as a bedspread/comforter on our water bed.    Antiques he got in auctions, including an antique train book, two antique ice buckets and a wine/champagne chiller, vases, cruets, train cars, accessories, and I believe a model train to add to his set-up, plus a large box of Precious Moments figurines he purchased for me, and much more.

Before leaving for his trip Ron had approximately 115 T-shirts.  I was constantly having to re-stack them to fit them onto the shelves in the closet.  He came home with eleven (11) more.  Now I will admit some of them are very cool, but where the heck am I going to fit them?

So ladies, be aware.  If your husband is retired and takes a trip which you don’t participate in because you are still working, you have no idea the things they will bring home.   Fun for him, clutter for me.